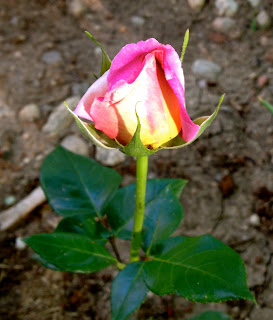 This is my Chicago Peace rose.  It is slowly opening.  Very slowly.  I'm pretty sure it is going to be gorgeous.  My kids got it for me for Mothers Day a couple of years ago.

Yesterday was another day.  It reminded me of a day long ago.  I was sober about 9 years I think.

I was working as a temporary for Kelly.  They had sent me to a Heating/Ventilation/Air Conditioning (HVAC) company for a week long assignment.  During the week I was there, I was told to dodge bill collectors, who were coming to the door - people would scramble like cock-roaches in the light when they showed up.  And I was to lie and say no one was there.  When I opened the mail I was shocked to see the long past due bills and the threats of legal action.  The people were not nice either.   At the end of the week, they called Kelly and asked if they could keep me for another couple of weeks.  Kelly called me to see if I was OK with that.  I told them I would call them back during my lunch break, which I did.  I told them I did not want to spend another week there and I had doubts they were going to pay Kelly for my time there.

My liaison at Kelly got straight on the phone with the person at the HVAC company and told them what I said.  Holy Crap.  When I got back from lunch, I heard whispering all over the place.  (I hate whispering in the workplace, I think it signifies that something has gone terribly wrong, or that it is a very sick environment.)  Then someone called me on speaker phone to tell me that I was not working out and I needed to finish the day, but my services were no longer needed.  As they were telling me this, someone in the room (and I heard on the speaker phone) said - "She was horrible!"  I spent a couple more hours there, some of the most poisoned hours I have ever spent.  The next day I had a long chat with my person at Kelly, telling her the predicament she had placed me in - and asked her if I was just supposed to stay somewhere I didn't like and fail to mention that they might never get paid.  "NO!" was what she said, but I feel her actions told me another story.   And just for giggles, I just googled the company and they are still alive and well, almost 20 years later - amazing!

So, back to 2012.  Yesterday I had to tell some people something they did not want to hear.  And I spent the day in their building.  There were closed doors and whispering.  I was not a popular girl.  Luckily, I had a lunch date with someone there who I have known for almost 18 years.  I told her they had complained that I was "difficult."  She said "Mary G." and "difficult" were two things she would NEVER put together.  I asked her to share that with some of her colleagues.

Through the day,  I remembered my experience at the HVAC company back in the day.   I remembered that I got through that day and would get through yesterday.  And I did.

When I got home, I got on my bike for some miles, got off it and immediately took off running.  If you have never done this, you ought to try it.  Running on rubber band legs.  Fun.  That's part of the story of the triathlon.

And now I need to go "suit up and show up" for another day.  Without God, I would have to hide under the covers of my bed.  But instead I will step out wearing the armor of God.

Your roses will be beautiful this year.

For some years I worked as a senior copy editor and that meant telling writers what was wrong with their work. I would mark sentences with a red pen and cross out paragraphs and tell them to rewrite or fact-check each name and date in the piece. Then I would recheck their sources and go back to them if I found any further errors. If the feature still seemed unreliable, I would cancel publication. It was a job designed for unpopularity and I was loathed at times.

But I learned a great deal and when I came to write features myself I knew how to accept criticism of my own writing gracefully.

You have come through so many learning curves Mary Christine and this is just another steep slope. People may not like being told what is wrong but they do appreciate integrity and that is what you are showing.

Pleasing all the people is impossible. I think that speaking your truth is appreciated by some while others want you to tell them what they want to hear. I have difficulty doing the latter. Amazing what a person can get through--life is like running on rubber band legs too.

I like your insights, and the fact that you googled the ole company 'just to see'

I've worked a couple of places like that, a flower shop in particular stands out in my mind. In their case they did close.

The place I work for now is like that. I dont' like it, but it is what it is.

Mary Christine
I am a sober member of Alcoholics Anonymous.

I Write Like by Mémoires, journal software. Analyze your writing!